JONATHAN Rosten knew how to dance – it was the language he expressed himself best in. His dance career included some magnificent highlights – solo parts for The Australian Ballet Company, and roles in Andrew Lloyd Webber’s Song and Dance (Cameron Mackintosh) and An Evening (Sydney Dance Company).

Jono also made his mark in commercial dance, from variety television appearances, to iconic dance-based commercials, and his various spots in the opening of the NSW Royal Bicentennial Concert.

After 20 years as a dancer, Jono began a new career path when he found himself writing, directing and choreographing his first show – A Really Off Off Broadway Show. Jono’s program notes for this end-of-year student performance at Jester’s Acting School in 1986 describe himself as, “One who has been thrust into directing and is better equipped to handle toasted cheese sandwiches”.

Just why he made this move seemed to be a combination of things – too many hours spent bitching about the quality of productions on offer at the time; a desire to turn his burgeoning ideas into reality; and seeing a now renowned production of an entire musical in a garage in North Sydney, which inspired Jono with it’s ‘Let’s Just Do It’ approach to entertainment.

Once this door was open, Jono spent the next ten years in a showbiz no-man’s-land, taking dance work where it paid well in order to finance his writing. Moving from mainstream to independent theatre also saw him work with and be inspired by some early mavericks, including choreographer John O’Connell on Mr. Cha Cha Says Dance.

An early unproduced work he created was And Then God Created Showbiz!, beginning a tradition of exclamation marks in his show titles. This was a comic exploration of the history of showbiz in a biblical and new age context. Ideas for numbers included The Ten Commandments in the style of The Ziegfeld Follies; a Fonteyn and Nureyev duet with a wheelchair-bound Fonteyn; and a climactic Xanadu-inspired number with Jesus on roller-skates.

Suffice to say the humour was subversive. The vaudevillian line-up of showgirls, drag-queens, biblical characters and historical showbiz luminaries would have made this show highly expensive and a copyright nightmare.

For Jono, it was a fantastic experiment he worked on for a decade, a place where all that seemed ‘unacceptable’ in his world (homosexuality, cross-dressing and new age spirituality) could be placed centre-stage. These were recurring themes in all his work, taken from his own life journey and stories he’d encountered along the way.

It took another ten years before Jono found someone out there like him. At the end of a trip across America, in which he took-in the heights of Broadway, Jono happened upon a small theatre company in Los Angeles holding a retrospective of the collected works of Justin Tanner, a self-made theatre man who created shows like Zombies Attack and Pot Mom. He went to see a new work every night of his stay in LA, and the impression it left on him lasted for the rest of his life.

He knew he had no time to waste. He knew he could be to Australia what Tanner was for Tinseltown, and shelved a host of stymied and incomplete works, including And Then God Created Showbiz! to embark on an entirely new piece called Show Struck!

Produced in the Northern Rivers area by Jono’s fledging theatre company Creative in Company, this new show was popular with audiences and was well-reviewed.

Jono created a show where the vaudevillian and alternative concepts were well within the context of a strong plot – one man’s journey through contemporary Australian show business, his desire to integrate spiritually in a spiritual vacuum, and to express his sexuality as a gay man. He wrote the show’s lyrics and produced, directed, choreographed and also acted in the show when one of the cast was injured.

Tired of endless touring to regional RSL’s, Daniel, the hero of Show Struck! is in creative limbo with his friend, mentor and bete-noire, Sherri, a showbiz survivor who has nurtured Daniel creatively and spiritually but will not let him flourish in the face of her own failures.

His journey takes him from also feeling like a failure in life, career and love to a state of limitless potential, having exorcised his demons – Sherri, his agent, and creative and sexual guilt within himself. Comically and beautifully, this journey is made in the form of an original show within a show.

One of Jono’s favourite real-life showbiz characters was Ed Wood of Plan 9 From Outer Space and Glen or Glenda fame. In the same spirit of this Hollywood maverick, Jono had big dreams to realise.

He left Byron Bay for the Blue Mountains in 1999 and found himself in a new creative community where he quickly made his presence felt.

He began working with other maverick producers, like Out of the Blue, a community theatre group who through sheer hard work and self-belief staged the electrifying Australian Premiere of The Who’s Rock Opera Tommy at Parramatta Riverside Theatres in 2003, choreographed by Jono. Bondi Ballet gave Jono the chance to write and choreograph Lost Brother in 2002, a highly personal dance-multimedia work about the drowning death of his older brother Peter.

His dream now was to live close to the city and take original shows into Sydney after out-of-town tryouts in Katoomba. The Clarendon Dinner Theatre was the perfect venue for this plan, having birthed many successful productions over the years, and Jono approached the venue with a new show She Males from Outer Space!

Like all Jono’s shows She Males was purposely derivative. He dubbed it ‘Scooby Doo meets Plan Nine from Outer Space’. A gang of kids lost in the Australian bush encounter two strangely attired women who look like they’re from a science fiction movie, but claim to be collecting minerals at midnight. Before the kids know it they’re trapped in an intergalactic breeding program when one of them – Anne, a devout Brethren girl – is kidnapped. The gang must get her back and face their own shortcomings and lack-of-acceptance in the process. 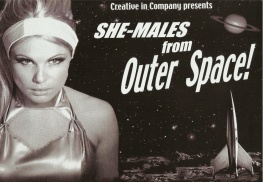 This show made it to Sydney in February 2004 as part of the Mardi Gras Cultural Festival, and had a 4-week season at The Edge Theatre in Newtown.

Jono injected this classic story of opposites with some of his best choreography. There were cheerleading sequences, mesmerising alien dance-moves and a continual comic through-line involving movement and lines inspired by old movies and television.

Deep in the plot was another of Jono’s appeals for acceptance when the hermaphrodite alien she-males explain to the younger gang that they are “Perfectly balanced in our male and female parts”, a beautiful piece of writing which challenges the gang (and us) to accept themselves, each other, and ultimately Anne’s alien she-male baby who was born during the curtain call.

Jono had succeeded in a long-held ambition to carry a weighty political message with a light comic touch, and reviewers and audiences responded. He had also discovered where his greatest talent lay – in storytelling using movement, dance and comic juxtaposition.

The Clarendon immediately asked for another show and Jono responded with his last unproduced show Double Identity (strangely there was no exclamation mark in this one). This show was again highly derivative, taking the film noir world and turning it on its head.

Inspired by audience reactions to the comic dance and movement styles in She Males, Jono created a series of dance/movement numbers and then built a plot around these. He also planned to return to the stage in a number of small crazy parts, including Frank the club owner who cross-dresses.

To date this show has had one performance only, two days before Jono died suddenly in rehearsal. Harking back to the garage-show in the 1980s, this performance was in the studio at the back of our home. I was the only member of the audience and the young leads – Nathan Roberts and Ines Vas De Sousa, were obviously going to be fantastic in the run. Jono was in there too – I had rarely seen him perform, and he sparkled with a glint in his eye, even when things went wrong and they had to do numbers from the top.

The man who started out as Buckingham in The Australian Ballet’s Three Musketeers, who danced for the Prince and Princess of Wales at Australia’s Bicentenary, who was The Milka Boy in the Swiss Alps with purple cows, was now integrating again in his newest incarnation as a singer-dancer-actor-writer-choreographer-director-producer.

Little did he or we know that the integration was so complete that only 48 hours later he would make the ultimate transition into death.

Double Identity did not have its 3-month season at The Clarendon.

I can imagine Jono changing the name of this production to The Show Must Not Go On! (and scoring an exclamation!) because showbiz seems all too superficial without him.

Reality of his absence has kicked-in and Creative in Company has dissipated with the understandable shock.

The irony is that while his company was called ‘Creative in Company’ it really was just Jono instigating the work and driving it forwards, like Daniel in Show Struck!, helped and supported by a lot of talented people, but it was always Jono driving the bus.

“Don’t worry about being famous,” was one of the last things he ever said to me, in a way which told me he had once cared about fame, but had certainly let go of it and become much happier as a result.

I knew then why I loved him so much, and will never forget my years in the presence of this cheeky showbiz original who achieved his life’s ambition to understand himself, well out of the spotlight.

For this I am sure he would be happy to be remembered in the AussieTheatre.com Hall of Fame.

Published by AussieTheatre.com in 2004.