I RECENTLY EXPERIENCED a series of very sweet ‘just desserts’ while working on the final stages of releasing my first novel, Tank Water.

Proofreading is an art. It’s best done as part of a team, and a team is what I was treated to with the polishing of Tank Water, recruited by Anna Solding of MidnightSun Publishing .

The interior of our book was formatted by Zena Shapter. Like the cover designer Kim Lock, Zena is an author in her own right. So is MidnightSun’s editor Anna Solding. There is something rather wonderful about being part of a team of writers who know how to nurture a new book into life.

When I independently published my other books in 2015, I had plenty of assistance for the proofreading stage. Other writers, mainly, but I also learned to rely on my first readers. When you don’t need to print hundreds of copies due to the luxury of Print On Demand (POD) services, you can afford to capitalise on the first eyes that experience a limited run of your paperbacks.

Confronted with a series of gradually improving proofs of Tank Water to check over, I did what I always do when it comes to checking my own work: I read the whole thing a few times. No-one will ever read Tank Water more than me, which is as it should be. Over the years since the full manuscript was completed, I’ve consumed the whole thing so many times I have forgotten the number.

It had been around a year since I’d experienced my coming-of-age Outback Noir tale, a hiatus I took from the work in order to make the proofreading all the sweeter.

Finally, I did what I advise all authors to do at this stage: put the dogs out, turn the phone off, shut down social media, make copious cups of tea and read my work as though it’s the last time I’ll ever do so.

How thrilling it was to see that Zena chose two of my favourite fonts: Garamond for the body copy, and Bradley Hand for the chapter headings.

Garamond is one of those classic serif typefaces borne of the invention of the printing press, more ‘open’ and rounded than Times and designed to suggest hand-written penmanship.

Bradley Hand emerged in the mid 1990s and is a font I have often chosen for publishing projects of my own. In Tank Water, it’s used to suggest protagonists James’s handwriting, since he’s a journalist attached to his notebook and unable to switch off from the task of recording his thoughts and reactions.

Seeing my chapters and the narrative arc that binds them together so beautifully laid out took my breath away. It feel surreal. Suddenly, internal processes that have taken a lifetime are set to burst into the consciousness of many other people.

I also came face-to-face with exactly what I’d created: a story that takes place in two time zones, with multiple inner thoughts from different characters. These required differentiation in the formatting, and Zena worked extremely quickly, efficiently and creatively to format these ideas on the page.

It rained all week, and I spent the whole time inside my very own tale.

Uncorrected proofs of Tank Water arrived by post soon after. In three dimensions, the publication has a wonderful, moody style to it which I immediately fell in love with. There’s plenty of Outback Noir out there right now, and we’re hitting a phase of this genre that deals reaches further into diverse territory than ever.

I always wanted the novel to be the type of book I would be drawn to on the shelf of a bookshop, to appeal to me visually. Having a stack of fully-fledged proofs in the house inspired by husband Richard to pick up a copy and begin reading; while I had the luxury of doing my final proofread with a paperback version to rest in my hand, not a computer screen.

All the hard work has paid off. Thanks to a team that includes professional proofreaders (who picked up several typos ans literals), Richard (who picked up two) and a good friend Jo (who picked up one that no-one else noticed), plenty of eyes have been on this publication, and it’s gone to press.

Richard’s biased, of course, but he couldn’t put Tank Water down!

Please preorder yours today, it’ll be out on October 1. 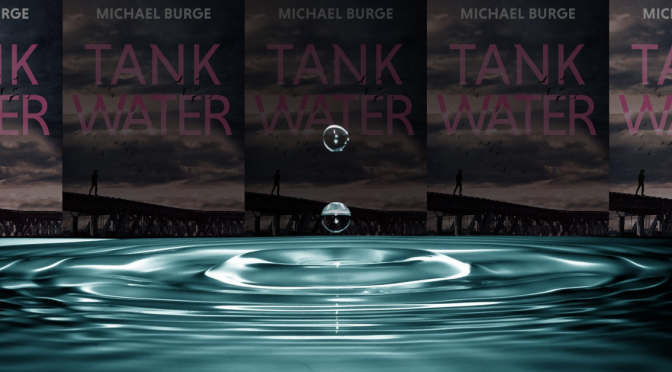 THE COVER OF my debut novel Tank Water is ready to share with the world!

Created by Kim Lock, lead designer of MidnightSun Publishing since 2013, this cover stood out from the group of samples I was sent, and didn’t need much tweaking at all.

Life-giving water captured in tanks comes from rainfall, so the approaching storm in Kim’s design is apt, but it’s also prescient. Facing it is a young person, who could be any one of several characters.

The railway causeway says everything about the rural decrepitude of the novel’s country setting. The person on it is walking into the storm, whereas flocks of birds are escaping in the other direction.

Yet there is hope in the light at the horizon… and the neon-strong pink should flag to those who know me that this work is like just about everything I write: bursting with messages of equality.

Tank Water will be published in October 2021 and is available for pre-order on Booktopia and Amazon.

Pre-ordering assists a book’s launch because pre-ordered purchases are counted in a title’s first week of sales, the strength of which can generate positive buzz about a book… so if you feel like buying your copies ahead of Tank Water’s release, you’ll be helping us!

My novel will also be available in bookshops nationally. Stockists will be able to order it in for you, if you’d like to support your local.

Soon, I’ll be releasing dates on a year-long book tour, with dates in Brisbane, Sydney, Canberra, Melbourne and more!

See you out there on the road. Meanwhile, thanks Kim (an author in her own right with a new book out this month), you really ‘got’ my story!

IT FEELS LIKE a lifetime ago that I embarked on my dream to write a novel and have it published. In fact it is… in 1988 I received the first of many rejections over three decades, for a Young Adult novel I wrote when I was 15.

If anyone had told me I would wait thirty-three years to see my first novel in print, I would probably have taken myself off to acquire a trade with a better strike rate for success.

But I never came close to giving up. Was it grit, ego, refusal to accept that my storytelling might be unworthy, or a combination? I’m not sure, but I will undoubtedly write about it one day because that’s how I am hard-wired.

Here is the announcement about my coming-of-age thriller set in rural Australia – Tank Water – from Books + Publishing, March 26 2021…

MidnightSun Publishing has acquired debut novel Tank Water by Michael Burge, a story of homophobic hate crimes and the dangers of growing up feeling different in rural Australia.

‘From the first time I met Michael, when he pitched his manuscript to me in Armidale, I’ve known that Tank Water is an important Australian novel,’ said Solding, adding that ‘it delves into themes that don’t often appear in our national literature’.

‘Through the taut and haunting narrative spanning two decades, Michael articulates what it can be like to grow up gay in the country and how prejudice and hate crimes are an extension of people’s fear of difference. We are so honoured and proud to be publishing this book.’

Born in the NSW New England region, Burge returned to live there in 2017. He said Tank Water has a fictional rural setting and is not based on any one case.

‘In the country, there are many stories about gay hatred leading to extremes of violence, and fiction is a way to start the difficult but necessary process of telling them at a relatively safe distance. I’m so excited and grateful that Anna acquired this tale about how three generations of a country family deal with toxic masculinity and must dig very deep. Taking a risk on such edgy subject matter is a testament to MidnightSun’s vision.’

Burge is a former Fairfax journalist and is currently the director of the High Country Writers Festival, which takes place in the rural region of Glen Innes in northern NSW each October. He self-published his nonfiction debut Questionable Deeds: Making a stand for equal love in 2015.

Tank Water will be published by MidnightSun in October 2021.