A Writer’s review of Madeleine St John’s The Women in Black.

“St John is reminding Australians to lighten up.”

“BUT she is a woman, although an Australian, so you know it is never after all only amusement on the part of a woman. The heart is always engaged, and so may be broken. And it will be my fault.”

So says the brilliantly observed Lithuanian anti-hero of this book, the divine Magda, marking out the emotional territory of Madeleine St John’s first novel.

Just out of school and awaiting her final examination results, when suburban Lisa takes a summer job at the city’s best department store in the ladies’ fashion section she encounters an array of women, their lives united by donning the same black dress on the shop floor.

Despite the uniformity of the title, St John fashions remarkable characters. There’s Magda, a ‘continental’ in charge of haute couture who embraces not only her love of high fashion, but continually reminds everyone around her about their good fortune to be living in a place such as Sydney at a time such as 1960.

Her unbridled positivity is counterpointed with the lovelorn Fay, past marriageable age but still dreaming despite everyone’s fears for her; and Patty, married and childless, confused about how she got into both states.

It’s Christmas, it’s hot, and the scene is set for conflict.

Yet it seem to take an age to arrive. Akin to the work of Jane Austen, The Women in Black avoids a classic story arc, as many comedies of manners do, and attempts to frame human behaviour in other ways.

Austen managed to instill her novels with light-hearted digs at the class system, the marriage game and how close genteel women in reduced circumstances come to ‘falling’. But where Austen does let some of her characters take the leap, in The Women in Black St John keeps her cast of women away from the brink.

I was reminded of Dymphna Cusack and Florence James’s seminal wartime Australia novel Come In Spinner as I was reading. This is not a surprise – both books focus on the lives and loves of a cluster of colleagues in a well-populated place of business in Sydney. 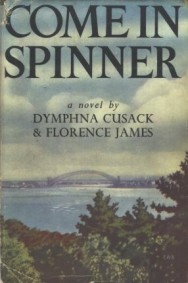 But I found myself yearning for Spinner’s stronger sense of drama. Exploring womens’ rights, abortion, prostitution and female identity, Cusack and James’s book courageously formed a much-needed stepping stone for the advancement of literature about women in this country. They were egged on by Miles Franklin, author of the much earlier My Brilliant Career, who the authors acknowledged as the ‘godmother’ of their collaboration.

Both novels include deft portraits of mid-century Australian marriages from a woman’s perspective. The sense of expectation and powerlessness, the giving and withholding of intimacy, the desire for equality that seems beyond reach, and the sense of being let down by and in competition with other wives and mothers in the pursuit of unattainable perfection.

“A political novel in the same way that a cartoon can be political.”

Yet I was met with a constant sense of Madeleine St John smiling at my reactions. Where I settled into another chapter anticipating Magda’s plan to capture a guileless Aussie gal into something sinister, like the white slave trade so often feared where immigrants were concerned in the 1950s, St John instead creates wonderful and humane character portraits of three-dimensional and extremely funny ‘reffos’, or, as we now call them, refugees.

St John was in her fifties when The Women in Black was completed, and it’s the book’s sense of maturity that makes it a worthwhile read.

It’s been accused of being anachronistic – a story about 1950’s sensibilities published in the 1990s – but St John had lived through enough of the twentieth century to blossom as a keen observer when the same rising conservatism reared its head ahead of the millennium’s turn.

With great gentility and pathos, she frames this emotional and literal austerity so it can be seen for what it is: overblown panic built on first world problems.

Like Magda, St John is reminding Australians to lighten up. The threats we perceive are not those that consume other parts of the world. We would do better to look at what’s actually in our lap, which is ultimately what all of the women wearing the uniform black – and their husbands and fathers – are brought to.

In that sense, I define The Women in Black as a political novel in the same way that a cartoon can be political, using a light touch when exploring serious issues. If the planned screenplay of the novel follows St John’s lead in this manner, and not simply her comedy, it will be worth watching.