“Should I be proud of what my ancestors and their peers achieved, or ashamed? It’s a question facing a lot of Australians.”

LONDON-BASED author Patsy Trench is the first to admit the workings of Australia’s farming history were not a natural subject for her to spend years researching. But her latest book A Country To Be Reckoned With tells the story of how a ‘Ten Pound Pom’ got to grips with our rural past through the experience of her influential ancestor, George Matcham Pitt.

“As a ‘townie’ living in London, the world of Australian 19th century agriculture was about as far outside my familiar sphere as it’s possible to get,” Trench said. 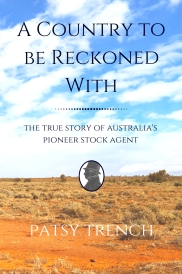 “I got to know my great-great-grandfather G.M. Pitt while I was writing my first book (The Worst Country in the World) about his grandmother, our pioneer migrant Mary Pitt.

“He was obviously a great character – larger than life, with a passion for rhetoric and a fondness for quoting from Shakespeare and Burns, which I understood was rare among farmers.”

Despite much hesitation, Trench said she started from the knowledge that the stock and station agency her ancestor founded — Pitt, Son & Badgery — was well-known in country circles, even though the company was taken over decades ago.

“In the end I decided to turn my ignorance to advantage: like the ‘New Chums’ who arrived in New South Wales in the 19th century expecting to make their fortune on the land knowing not the first thing about farming.

“I came at the topic as an outsider and I make no bones about it.”

Trench made several trips to rural New South Wales with Australian family members during her research, which she describes as “mystery tours” that led to several revelations about her subject and family.

“I knew ‘GM’ had taken up land in the Gwydir district in the 1840s, but there was also evidence he visited the district ten years earlier, along with his de-facto stepfather William Scott,” she said.

“On our first visit to Moree we could find no trace of him in the 1830s, but further research revealed that Scott and he had acquired a licence for a property on the Gwydir River, which was taken from them after several years in complex circumstances.”

“There was a Tom Pitt born in 1838, the year my great-great-grandfather arrived at the Gwydir in search of land,” she said.

“There are no signs of Aboriginal Pitts before that time, but there are now hundreds living in the area and I’ve been in touch with them and hope to meet up with them one day. It’s believed they got their name from GM, one way or another.”

A Country To Be Reckoned With is Trench’s second major work on her family’s Australian origins, and brings to life a relatively unknown ‘Bush’ archetype: the auctioneer.

“I could quote a poem I reproduce in the book, which appeared in a Pitt, Son & Badgery anniversary leaflet,” she said.

“They describe the auctioneer as ‘the fellow with his coat off in the pen’: a man of charisma and personality with a remarkable gift of the gab. A master at handling men and getting things going, often asked to MC events such as weddings; with a retentive memory, sharp wit and ‘captivating smile’, manipulative, optimistic and perennially cheerful.

“All that said, having witnessed an actual cattle auction last year in Wagga Wagga, the auctioneer’s job is to get the thing done as quickly and efficiently as possible, so not a lot of time for captivating smiles or clever jokes.”

Trench, a ‘Ten Pound Pom’ who migrated to Australia in the 1960s to further her acting career, eventually returned to the United Kingdom. She believes researching and writing about her adoptive country’s past has evolved her view of it.

“When I lived here in my hedonistic youth I thought Australia was paradise and the people the most friendly and welcoming people in the world,” she said.

“Now I know a bit about Australia’s colonial past I see things, and the people, a bit differently. It’s still a stunningly beautiful country with great people in it, but there’s this undercurrent of a dark past that has only really emerged in the past thirty years or so.”

Since her family was responsible for taking land that belonged to Indigenous people, Trench ruminates on whether she is complicit in this confronting history.

“Should I be proud of what my ancestors and their peers achieved, or ashamed? It’s a question facing a lot of Australians and the attitude to their colonial history seems to change every time I come here.”

In the same way that Trench’s first book The Worst Country in the World led to the journey that became A Country To Be Reckoned With, her new book seems to be demanding more storytelling of this writer.

“It’s the Aboriginal connection I would like to get to the bottom of,” she said. “Who was Tom Pitt, born in what was to become the Moree district in 1838? He seems to have hundreds of descendants but nobody seems to know who his parents were, or how he acquired his name. I am hoping to hook up with some Aboriginal Pitts who I’ve been in contact with online. There are some great stories to be told.”