A Writer looks at modern families.

IT was charming and kind of awkward when Australians welcomed the cast of America’s ABC comedy Modern Family (what Aussies might prefer to call a ‘new-fangled mob’) to our shores earlier this year, for the production of a special Australian ‘destination’ episode.

The series has consistently rated highly with Australian viewers and the locally filmed episode was always going to please and offend us.

Did they hit the mark and show us something about ourselves that’s not already apparent from any number of fantastic Australian television families, from The Sullivans to The Moodys?

The answer might lie in comparing the fiction with the data.

“There is simply no mainstream equivalent on Australian television.”

The first major difference is in Modern Family’s portrayal of three family units with kids – it’s simply not representative (what Aussies might prefer to call ‘average’)  of this country.

A trio of multi-generational groupings, including biological, adopted, and step-children, is not the Australian way, according to the Australian Institute of Family Studies.

Two out of three Australian families had children in the 2011 census, in fact, couples without children made up the dominant chunk of the pie chart, at 37.8 per cent of family units.

A beloved and core element to Modern Family’s make-up is the male same-sex couple (Mitch and Cam). Despite pushing boundaries in the United States for its honest (and to many, not honest enough) portrayal of the realities of same-sex families with children, this is not Australia’s reality.

The Australian Bureau of Statistics reveals that Australian same-sex couples with children are overwhelmingly female (a whopping 89 per cent).

Australia is undoubtedly ready for Mitch and Cam adopting children on our television screens, but our communities are a long way behind.

Racial and cultural diversity is a core principle of Modern Family’s casting. Out of a total of twelve main characters, 33 per cent of the show’s key cast could be defined as racially diverse, including Latin-American and Asian-American representation.

There is simply no mainstream commercial equivalent on Australian television, an issue which continues to plague the industry, while a racially diverse audience of just under one-quarter of all Australians remains barely represented on our small screen.

Jesse Tyler Ferguson and Eric Stonestreet (who play  Mitch and Cam) released a video produced by Australian Marriage Equality, comically expressing (what Aussies call ‘taking the piss’) their astonishment that same-sex marriage is not yet legal in Australia.

So, not until a racially diverse, childless lesbian couple inhabits our television comedies, will Australians become a truly ‘modern family’.

Until then we’ll need fictional outsiders to show us what we could be if we tried.

I’VE written a lot about LGBTQI equality in the past 18 months. It’s no wonder – the marriage equality issue has reached boiling point in Australia, and many are wondering if this country is mature enough to leapfrog civil unions (which were an essential step in UK and NZ legislation a decade ago) and go ‘straight’ to full marriage laws.

Some days I think so, some days I waver, although I do have a three-way bet with some friends in New Zealand about when same-sex marriage will arrive on our shores. My odds are about middling, I suspect.

Meanwhile, I write. This poetic rant first appeared on LGBTicons.

I’m starting to lose it with Australia.

THEY say that I have only two choices here in my homeland: I must either love this place or leave it.

I did try, like many of my brothers and sisters before me, when I took myself to the other side of the world, believing that distance would disguise my self disgust.

But there, in the fold of loneliness, the gay man still showed himself in the mirror when I stopped to look, and so I brought him home.

Oh, the endless fuss that still rumbles from my coming-out homecoming. The silences and  the judgements that are held against me behind the smiles.

They wanted me to lie, now they want to punish me for being a liar, but I will not wear it.

No-one asks if you’re gay when you take out a home loan with your same-sex partner.

No-one asks if you feel equal when they tax you at the same rate as those who are free to express their love through marriage.

No-one asks if you’re gay when the bushfires lick every stick in the valley below the rows of precious lives, they only demand, quite rightly, that you help.

And we help. Yet that is never quite enough.

I see the dykes like patient, weathered stones, waiting for this people to realise their help is solid, unflinching and safe.

I see the poofs in caring generations that do not waver, they only want to play when it’s time to play.

I’ve watched us earn our equality. Our stripes are bright and they have nothing left to prove.

But the people elected a man who told them to be very, very afraid of difference.

He has a dyke sister who, we hope, is starting to get very, very angry, the way dykes sometimes can, and while their edge begins to scare you, you know you’re in very good hands, if you’re on their side.

I hope she rips ten colours of rainbow out of him this Christmas, as another year closes on the country he leads, the same country, and the same man, that prevent her marrying her fiancée.

I hope he hides, for even just a moment, in retreat, and has a long hard look at himself in the ensuite bathroom mirror, before he wipes that leering smile back onto his face, and puts on another show for the only people he truly represents: his family.

No more platitudes. No more promises. No more big Aussie smiles to cover our shame.

I am not going to leave this place, until none of its children must leave it in fear. 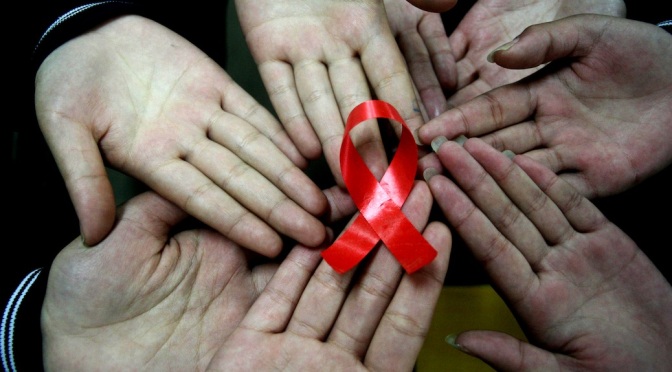 THE world has been watching Melbourne this week as the city hosts the 20th International AIDS Conference.

Despite initial reports from the event focusing understandably on the delegates killed by the missile attack on their flight over eastern Ukraine, the conference agenda hit the airwaves visibly on this week’s episode of QandA.

As a result a range of new and unfamiliar language has been presented to mainstream and social media audiences. From ‘Sero-Discordant Relationship’, ‘PEP’, ‘PrEP’, ‘TasP’, ‘ART’ and ‘PMTCT’ to phrases like ‘heteronormative’ and ‘men who have sex with men’, Australians have been getting a higher-than-average dose of HIV/AIDS-related vocabulary.

Unfortunately the word use is not coming with enough interpretation. ‘Conference-style’ or ‘industry-speak’ acronyms and sound bites occur in every sector, but with its ‘Stepping Up The Pace’ mission statement, this particular conference and its media delegates could have done with more plain talking and less weasel words to get the important messages about HIV/AIDS through to the communities they are seeking to engage.

With new HIV infection levels in Australia at a 20-year high, one of those communities is surely ours. Surprising survey results on Queensland’s high-level ignorance about how HIV is acquired hit the mainstream media just a week after the conference.

The international conference has a focus on tackling new infections and raised questions about the direction new HIV/AIDS awareness campaigns should take, considering the scare-factor of the Grim Reaper ad campaign of the late 1980s, and new data which reveals the 96 per cent protection rate for sero-discordant sexual encounters if one of the partners is being treated with ARV.

If you’re confused it’s no wonder. I thought I knew plenty about HIV/AIDS, but, like writer and HIV activist Nic Holas who was on the QandA panel, I am torn about whether this should be an opinion piece or a community service announcement.

“I believe unlocking the acronyms will help.”

One of the terms the conference has chosen to focus on is ‘Men who have Sex with Men’ (MSM), although the focus is mainly on this HIV/AIDS risk group overseas.

“It is a key objective of the 20th International AIDS Conference to shine a light on those men who have sex with men, sex workers, transgender people and people who use drugs who do not have the same access to treatment, care and prevention as their western colleagues may do,” UNAIDS Executive Director Michel Sidibé said at the start of the conference.

Ever since the phrase was coined in the 1990s as a means of de-stigmatising HIV infections which were the result of heterosexual men who engaged in sex with other men, it has sat rather uninterpreted outside the HIV/AIDS community.

But is it effective when addressing Australians in the media? To answer that it’s important to underline that MSM does not mean ‘gay’ or ‘homosexual’, in fact the term was invented to shield MSMs from any hint of ‘gay’.

Many in the gay community have sexual encounters with MSMs in sex-on-premises businesses (read: ‘saunas’ and/or ‘bathhouses’) or at beats (read: ‘public toilets’, although beats are also located at road-stops, sports fields, and can often crop-up right in the high street at bookshops or other businesses).

It doesn’t take long at a gathering of gay men for the stories about baby seats in the backs of cars at beats, or wives dropping husbands at saunas, to enter the conversation with an awkward mixture of laughter and understanding. MSM do not identify as ‘gay’ and they (and therefore their heterosexual sexual partners) remain at very high risk of HIV infection, in part because they tend not to get tested regularly.

Post Exposure Prophylaxis (PEP) is a mouthful, but it’s also something the Australian community could develop a greater understanding of. Available at most hospital emergency departments, and essential to start before 72 hours have passed since exposure to the HIV virus, PEP is a four-week course of anti-HIV medication with a decent success rate.

Pre-Exposure Prophylaxis (PrEP) is similar, but it’s engaged as a means of preventing HIV infection. Sero-discordant couples (when one partner is HIV positive and the other is HIV negative) are in the demographic which can benefit from PrEP, including couples who are trying conceive a child while protecting the uninfected partner from contracting HIV.

Treatment as Prevention (TasP) is an approach to HIV prevention which acknowledges that a sexual partner taking antiretroviral (ARV) medication has a greatly-reduced viral load (the amount of HIV virus in body fluids). It’s important to acknowledge that ARV’s side-effects means this form of treatment program is not for everyone. TasP has made a significant difference in Prevention of Mother-to-Child Transmission (PMTCT) of HIV during breastfeeding.

‘Heteronormative’ is a term that has often cropped-up in HIV/AIDS debates, generally at the queer theory end of the spectrum, and it’s used to tackle the assumption that gender and sexual orientation fall into fixed categories of ‘man’ and ‘woman’ according to abstract ‘laws of nature’ that have led to the shaming of same-sex attracted people.

Such stigmatising only increases the conditions in which higher rates of HIV infection occur, no matter which country you live in.

There are many other new elements to HIV/AIDS, from home testing and rapid testing at clinics (which have the potential to ensure a higher rate of MSM testing), to new measures for assisting the ongoing health of long-infected PLWHA (‘People Living With HIV/AIDS’).

It’s a veritable alphabet of acronyms which many LGBTQI (there we go again) remain grateful for because this kind of language aims to avoid assumptions of ‘victims’ and blame.

While it’s tempting for Australians to believe that HIV/AIDS in a third-world issue, that we have tackled the problem, and there is plenty of good news to get our heads around, the issue of how to communicate that message without an increase in new HIV infections is now one of the main HIV/AIDS challenges facing Australia. I believe unlocking the acronyms will help.