A Writer learns the cost of casting.

HAVING started out in the Australian theatre scene as a designer, and reinvented myself in England as just about everything else – director, writer, producer – I eventually re-trained as an actor on Sydney’s fringe, made a splash in a couple of college shows, and then spent a year totally unemployed in that field apart from a stint in a car commercial. Probably an average result, in hindsight.

My big question was always this: how did actors without agents even hear about roles that were going, let alone get cast in one?

When an independent theatre company was producing the Australian premiere of Richard Nelson’s beautiful play Madame Melville at the Belvoir Street Theatre in Sydney, I found some answers.

A friend in the cast loaned me a copy of the script. Nelson’s sentimental study of his sexual awakening at the hands of a Parisian teacher in the 1960s is so evocatively written I could envisage it on the stage after just one read. There was also a part in the play I thought I had half a chance of getting cast in.

It’s impossible to explain this role without providing the worst spoilers for anyone who has not seen a production of Madame Melville. Suffice to say the character is the very rarest of roles in the modern theatre – a short, devastating attack on the protagonist, bringing the play to a swift, bittersweet conclusion.

So I pushed, a little, and put myself forward.

The offer of an audition hung in the air while the production company deliberated over theatre dates. Eventually, my friend called and said the show probably wouldn’t go ahead – there was a hole in the budget, and the highly experienced director would not work for free.

Disappointed, and experienced in putting budgets together, I asked, “How big is the hole?” I was in an excellent position to ask – I’d just sold my house, and was about to buy again in a cheaper market. I could afford to invest in my career a little.

My friend cried on the phone when I said I’d be happy to put up the money, which was nothing, really, just a fair fee for the director.

As a firm believer that everyone should get something from a professional collaboration, I understood his bottom line. I also understood mine – all I wanted in return was to remain an anonymous donor, and an audition for the role.

In due course, I got the call. The slightly scary part was having to front-up at NIDA, which was always imposing for this graduate. I’d left without really saying goodbye, my mind focussed on desperate family matters at home.

I’d been back for the place’s 40th birthday, and stood in a crowd watching a video clip on a huge screen celebrating student work across those four decades, and been part of the admiring-yet-envious silence, when Cate Blanchett’s picture flashed-up on the screen.

Because, like it or not, we who were watching comprised the 99 percent that NIDA’s dream factory told us would be unemployed for 99 percent of the time.

The director greeted me generously – we’d been NIDA students about the same time – and he took me upstairs to one of the familiar rehearsal rooms, explaining he was on a break from the annual NIDA applicant actors’ auditions.

That made me even more nervous – he’d been auditioned-for by even younger, hungrier, more hopeful actors than me all morning!

My first piece was a disaster. The other seemed to take him by surprise, and got a genuine laugh. He said that if he’d seen me do that in the morning, he’d have asked me back for the afternoon.

I took my leave and walked back past the young people posturing around the lunch room waiting for their afternoon call-back. I’d’ve been ‘asked back’ too, I muttered to them in my imagination. 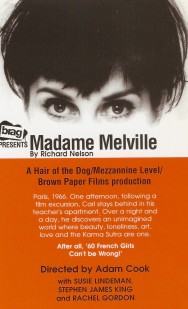 Weeks later, I heard that Madame Melville was going ahead. We’d secured a slightly awkward slot, right off the back of New Years, which was only weeks away, meaning the production would open to little advance publicity.

But I decided to enjoy not having to worry about such matters, and just act.

The professional cast was welcoming and generous, and I embraced the chance to inhabit the half-light of theatre wings once again. Nelson’s script calls for offstage voices throughout, and I had fun with those, whiling-away the hour or so before my entrance.

A one-line role over an extended season was a bit like a marathon of self-amusement. I created my character’s back story, went through serious preparations while listening the others onstage over the tannoy, gossiped with the cast of the upstairs Belvoir show, and duly took my cue.

Entering through the audience, I regularly heard their gasps of surprise and shock as I did battle with the protagonist … it was a joy to be part of such dramatic impact.

My technique of getting an audition got me nowhere beyond this production, the curtain call sometimes seemed longer than my time on the stage, but we got good audiences and well reviewed as a creative team, and a modest profit-share cheque eventually arrived in the post.

Odds aside, it was life-enlarging to be back in the theatre as part of the one per cent for a Summer.