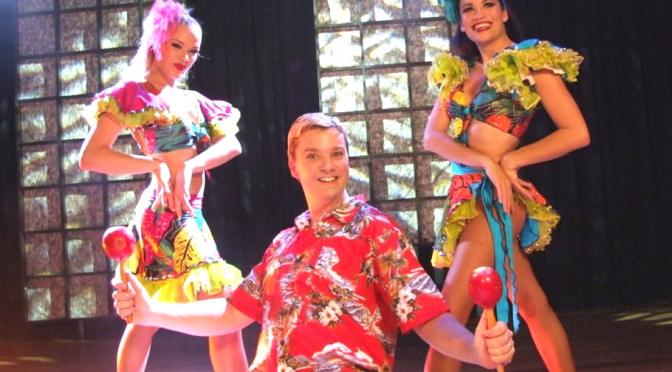 THE high country of the NSW New England region is renowned for its autumn colour, but one man who was born at Tenterfield is set to be remembered with an even brighter splash at the inaugural Peter Allen Festival this September.

Parkes celebrates Elvis, even though ‘The King’ never played that corner of NSW, and now Peter Allen fans are encouraged to find their way to Tenterfield to dress up in celebration of the town’s internationally famous son.

At the peak of Allen’s career his hit song ‘I Go To Rio’ topped the Australian charts for five weeks. This high-energy number was backed up by the flamboyant, maraca-shaking, Brazilian-shirted image that became synonymous with Peter Allen’s live performances.

Danny has earned his Peter Allen stripes performing Tenterfield to Rio for a decade, and was awarded the Australian Entertainment Mo Award for Variety Entertainer of the Year.

“To be the headline act for the inaugural festival is an amazing honour,” he said. “I am so excited to perform the show in Tenterfield and to be a part of the celebration”.

“Unlike the stage show The Boy From Oz — which is the story of Peter’s life — this show is me, celebrating the wonderful music of Peter Allen.”

The song list of any tribute act is always of great interest to fans, and a show built around the work of Australia’s Oscar-winning singer-songwriter raises the question of what Danny will be bringing to his cabaret-style performances.

“There’s so many! Where do you start?” he said. “‘I Go To Rio’ has those fun, great Latin rhythms. ‘Once Before I Go’ is a reflective song of life and love. ‘Bi-Coastal’ has a great story behind the story, but I love it for the great bass line.”

A perennial favourite of Peter Allen fans is the song he wrote as a gift to the town of his birth — ‘Tenterfield Saddler’ — regularly requested and performed by Allen’s friends Bette Midler and Olivia Newton-John.

“‘Tenterfield Saddler’ is just one of the best ever songs written,” Danny said.

“As an entertainer, performing Peter’s songs is incredible as every one has a great story.

“It’s my job to tell that story, which is what I love to do.”

In honour of Tenterfield’s most famous son, the Peter Allen Festival plans to close the town’s main street to traffic and rename it Peter Allen Boulevard for the whole of Saturday September 8.

Throughout the day, the thoroughfare will be a celebration of music, art, culture and colour.

Visitors are encouraged to bring their best Peter Allen-themed looks to town and strut their stuff along the high street, which will host artisan markets, musicians and entertainment.

Danny Elliott will feature in three performances of Tenterfield to Rio at the Tenterfield School of Arts, situated right at the heart of Peter Allen Boulevard. The cabaret-style show has proved very popular with visitors, and due to popular demand there will be an extra show at 10am on Sunday September 9.

“The energy and flamboyance of the shows are infectious,” Danny said. “But for me, it’s the connection Peter Allen made with people”.

“Whether in a giant stadium or an intimate cabaret, he connected with everyone in the room.

“I think Peter’s strength was to tell a story. What made him so popular was also the way these great stories were performed. With such high energy, even in ballads, he seemed to have an incredible electricity about him.”

Australian performers Todd McKenney and Hugh Jackman have stepped into Peter Allen’s shoes to perform The Boy From Oz in Australia and the United States, so what was it like for Danny to get to grips with the maracas?

“From an early age I played piano and sang, then went on to learn a variety of different musical instruments.” he said. “As a singer/musician, the two things I’ve had to work on to perform Tenterfield to Rio are the dance and movements, and the fitness to keep it up for a whole show!”

And why does he think people love dressing up? “I think it’s all about the escape. To get out of ‘normal life’ and have a bit of fun,” he said.

“To get out there and express yourself, and your likes, whether it’s a footy team or your favourite singer, it’s all fun!

“I’m already excited about it. Although I think it will be emotional when it comes to singing ‘Tenterfield Saddler’. To be right there, performing songs from Australia’s greatest singer/songwriter/entertainer Peter Allen, it already sends shivers up my spine. I can’t wait!”