AT the point when rejection of my writing was getting too much, I foolishly turned to another element of the performing arts and took up an even worse pastime if rejection was not my thing – I went back to school and studied acting.

Five years on the stage opened my eyes wider to the inner workings of the performing arts industry, yet I learnt no more about how to get ahead in showbiz.

But the experience gave me some of the most exciting days of my life up to that point, and one production in particular sums up the wacky life led by the actor.

After securing an audition with an independent theatre company in Sydney – we’ll call it Slash Theatre – I was cast in a paid gig (tick), performing Shakespeare’s King Lear (tick), for an established company with a loyal audience (tick), at a real theatre (tick, and don’t laugh, often you’re expected to perform in pub cellars with sewerage pipes at nose level).

The first week saw everyone co-opted into detailed sessions of transposing the text, during which the director made no secret of her willingness to be open to ideas from the actors (tick, and great fodder for a writer).

Then I had an idea …

My character, Kent, is a loyal friend to the King, and spends the bulk of the play in disguise. Casting all Shakespeare’s male characters as female, the director had interestingly changed the power structure of the play, but there was one thing she didn’t do – my role was male in Shakespeare’s original, and remained male in this new vision. Why?

That’s where my idea came in – if being female meant access to power and security in this director’s vision, then surely, I thought, Kent should disguise himself as a woman in this production?

It would add to the comic possibilities, but, like Max Klinger in M*A*S*H, the cross dressing could also be for a purpose that wasn’t entirely funny.

Far from being dismissed, the idea was pondered, and eventually approved. I hasten to add it scared me shitless – I am not a man who would ever pass convincingly as a woman, and so, my courageous offer would need some rationale, some device from within this interesting world, to support my disguise, which was an unchangeable plot point of Shakespeare’s play. It would certainly need an effective costume.

But I completely placed my trust in this director, donned a rehearsal skirt, and experimented with my voice and my character’s journey.

Concurrently, we were put through our paces by a fight director, daily, to achieve complicated sword fighting sequences. Seeing empowered women wielding swords in pivotal Shakespearean roles was an amazing experience.

Many of the cast had been selected for their stage fighting skills and experience. A few of us were totally new to the discipline, so we trained from the ground up. Nevertheless, the cast quickly fell into two groups: the ‘Fight Club’, and the rest of us who were learning to execute the moves.

At last came the moment when the costume designer was coordinating fittings, and his vision for this female-dominated world would surely include a costume to assist in making my idea work within the world of the play.

My excitement quickly turned to dread when he produced a dress which I could tell immediately I was never going to fit into. Vainly, I tried, and it ripped, but by that time the designer had walked away, seemingly uninterested in what I would be wearing for 90 per cent of the play.

But production stresses were kicking-in and the director became unapproachable. Having been a director, I decided that what she’d appreciate the most was a proactive actor who’d sort out his own costume issues for himself.

Being a trained costume designer in addition, I simply replicated what the designer had created for the female characters in the production, so well in fact that even he would have to admit it fitted-into the world of the play seamlessly – forget that he wasn’t really doing his job until he’d adequately costumed me.

Before the great theatrical sin I’d committed was voiced, I also spent time ensuring that a few dangerous backstage conditions were sorted-out, not by complaining at notes sessions, but by proactively recruiting fellow cast members into helping me move the sharp metal spiked stair treads dumped across the main backstage exit, waiting to impale someone’s knee in the dark, like other nasty traps overlooked by the stage managers.

I also tried to bridge the growing gap between the cast (who were expected to assemble bleacher seating before dress runs) and the crew (who were under great stress as a difficult set elements were wrangled). I knew that whinging actors were no help to this scenario.

But when the producer (who’d recently given birth and had her attentions split so many ways she was hardly there) spat at the cast saying we should be thankful we were being paid, I responded … by asserting that it wasn’t helpful to put things that way.

A kind of calm descended on the company at that point – we had a schools’ matinee to perform, and the auditorium filled with hundreds of raucous students, hungry for entertainment.

The show opened, I executed my disguise scene in good time, and we went into the first major fight sequence, in which Kent makes a desperate attempt to escape capture.

I had one move to execute which the fight director encouraged me to compare to teeing off on a golf course – a 360-degree swing which was Kent’s attempt to slit the throat of his opponent who was prone on the ground. If it was golf, the way this move was choreographed would have seen the ball fly off into the audience …

And that’s exactly what my sword did, after the tip clipped the floor and the choreographed force of the swing behind it sent the weapon right out of my sweaty hands.

In dread, I watched as the silver spike glinted in the light high above the heads of the amazed school boys, who were surely thinking: This is supposed to happen, right?

I had immediate visions of being arrested for impaling children through the temples, as all eyes in the room watched the sword descend, and a small boy – the hero of the day – stood and simply caught the blade as it flew towards his head, just like in footy.

Speechless, I led a standing ovation for the kid who’d saved my ass, and called him to the stage to return the sword to my hand – all in character, I hasten to add – and then returned to the fight, which was only half over.

When I stumbled off the stage minutes later, some of my non-Fight Club comrades were desperate to know what had happened. I implored them to just soldier on.

We went through the Q&A session with students and teachers afterwards, at which the amazing stunts the gathered crowd had participated in were congratulated. I left it to the director and the fight director to explain. They declined, poe-faced.

The schools left, and we started de-mobbing the show, when I got a call to meet the director in the upper foyer.

As I approached I could hear her speaking. Thinking someone was being seen before me, I slowed down, only to see her rehearsing something to an imaginary other. Then it dawned on me – I was the imaginary other.

I cleared my throat, and gently knocked.

I don’t know whether it was my courageous act of completing my own costume, to make sense of what I was doing in the confusing world the director was struggling to birth, or whether it was the impromptu thrills of my sword throwing, but I was summarily sacked.

I was quite calm, just asked her to explain how the costume she wanted me to wear fit into the world of the play, let alone across my torso?

She was incapable of speaking, from anger, from fatigue and confusion. This was a useless moment that would never find an answer, because the director had lost touch with the fundamental questions which were part and parcel of her role, and I’d unwittingly opened the doorway to the kind of shame and negative attention endured by cross-dressers for centuries.

I heard later they’d changed the golf-swing move so that if the sword slipped from my replacement’s hands, it would fly into the wings and not at the audience’s heads. Common practice, I would have thought, on reflection.

I will always remember that day fondly as a wildly creative one, because electrifying experiences can happen onstage, even when they are completely unrehearsed.

I know I engaged the audience far more in those minutes than the production possibly did over two seasons. Getting the sack for it smarted, but call it synchronicity or coincidence, less than a week later I read that even the great Katharine Hepburn (who I in no way compare myself to) got the sack when she was an emerging actor – it can be a measure of creative fitness. 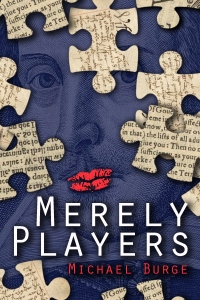 And I gave one young audience member a day he’ll never forget!

An extract from Merely Players.